Politicians and pundits are again lamenting the latest slaughter in Colorado, where a dozen moviegoers were murdered by a troubled young man who had no trouble buying an assault rifle and other guns. But the horror will be transient while the NRA’s clout has permanence, write Bill Moyers and Michael Winship.

You might think Wayne LaPierre, executive vice president of and spokesman for the mighty American gun lobby, the National Rifle Association, has an almost cosmic sense of timing. In 2007, at the NRA’s annual convention in St. Louis, he warned the crowd that, “Today, there is not one firearm owner whose freedom is secure.” Two days later, a young man opened fire on the campus of Virginia Tech, killing 32 students, staff and teachers.

Just last week LaPierre showed up at the United Nations Conference on the Arms Trade Treaty in New York and spoke out against what he called “anti-freedom policies that disregard American citizens’ right to self-defense.” 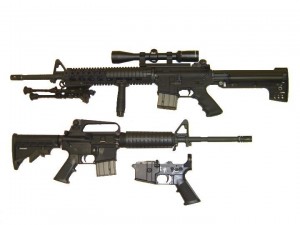 Now at least 12 are dead in Aurora, Colorado, gunned down at a showing of the new film, “The Dark Knight Rises,” a Batman movie filled with make-believe violence. One of the guns the shooter reportedly used was an AK-47 type assault weapon that was banned in 1994. The NRA pressured Congress to let the ban run out in 2004.

Obviously, LaPierre’s timing isn’t cosmic, just coincidental and unfortunate; as Shakespeare famously wrote, the fault is not in our stars, but in ourselves. In other words, people — people with guns. There are some 300 million guns in the United States, one in four adult Americans owns at least one and most of them are men.

According to the British newspaper The Guardian, over the last 30 years, “the number of states with a law that automatically approves licences to carry concealed weapons provided an applicant clears a criminal background check has risen from eight to 38.”

Every year there are 30,000 gun deaths and perhaps as many as 300,000 gun-related assaults in the U.S. Firearm violence costs our country as much as $100 billion a year. Toys are regulated with greater care and safety concerns than guns.

So why do we always act so surprised? Violence is our alter ego, wired into our Stone Age brains, so intrinsic its toxic eruptions no longer shock, except momentarily when we hear of a mass shooting like this latest in Colorado. But this, too, will pass as the nation of the short attention span quickly finds the next thing to divert us from the hard realities of America in 2012.

We are a country which began with the forced subjugation into slavery of millions of Africans and the reliance on arms against Native Americans for its westward expansion. In truth, more settlers traveling the Oregon Trail died from accidental, self-inflicted gunshots wounds than Indian attacks we were not only bloodthirsty but also inept.

Nonetheless, we have become so gun loving, so gun crazy, so blasÃ© about home-grown violence that far more Americans have been casualties of domestic gunfire than have died in all our wars combined. In Arizona last year, just days after the Gabby Giffords shooting, sales of the weapon used in the slaughter a 9 millimeter Glock semi-automatic pistol doubled.

Maybe you remember a video you can still see on YouTube. In it, Adam Gadahn, an American born member of al Qaeda, the first U.S. citizen charged with treason since 1952, urges terrorists to carry out attacks on the United States.

Right before your eyes he says, “America is absolutely awash with easily obtainable firearms. You can go down to a gun show at the local convention center and come away with a fully automatic assault rifle without a background check, and most likely, without having to show an identification card. So what are you waiting for?”

The gunman in Colorado waited only for his opportunity. So there you have it the arsenal of democracy has been transformed into the arsenal of death. And the NRA? The NRA is the enabler of death paranoid, delusional and as venomous as a scorpion. With the weak-kneed acquiescence of our politicians, the National Rifle Association has turned the Second Amendment of the Constitution into a cruel and deadly hoax.

← Advantage to Mr. Romney
Batman in an Age of Polarization →

14 comments for “Lamenting the Dead, Not the Laws”