Exclusive: The last of Christopher Nolan’s “Batman” trilogy may always be remembered for the mass murder of fans packed into a theater in Colorado to see an opening-night showing. But “The Dark Knight Rises” has been controversial for other  reasons in a deeply polarized America, writes Lisa Pease.

Before I review “The Dark Knight Rises,” I wanted to share what writer/director Christopher Nolan posted on the official Web site for his latest Batman movie:

“Speaking on behalf of the cast and crew of ‘The Dark Knight Rises,’ I would like to express our profound sorrow at the senseless tragedy that has befallen the entire Aurora community. I would not presume to know anything about the victims of the shooting but that they were there last night to watch a movie. 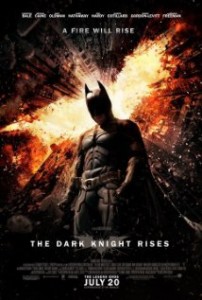 “I believe movies are one of the great American art forms and the shared experience of watching a story unfold on screen is an important and joyful pastime. The movie theatre is my home, and the idea that someone would violate that innocent and hopeful place in such an unbearably savage way is devastating to me.

“Nothing any of us can say could ever adequately express our feelings for the innocent victims of this appalling crime, but our thoughts are with them and their families.”

I’ve never considered it an act of courage to enter a movie theater before. This time, it was different. After the tragic shooting at the midnight screening in Aurora, Colorado, I felt just a tad nervous and almost guilty, because I knew I was going to survive a film that others had not.

The final film of Christopher Nolan’s trilogy about “the Batman” had already been the subject of strong emotions long before the tragic shooting. Rush Limbaugh thought it was too liberal. David Sirota thought it was anti-Occupy. Catwoman actress Anne Hathaway said in all seriousness that she thought it should win Best Picture at the Oscars, and not just because she was in it.

The movie review site “Rotten Tomatoes” had so many film fans throwing violent verbal volleys at the critics that the site took an unprecedented step and shut down all comments until the film was released.

The film opens a couple of years or so after the previous film ended, with Bruce Wayne holed up in his mansion, ala Howard Hughes (there was even a reference to long yellow fingernails). Catwoman breaks into his “unbreakable” safe and steals something of value, arousing Wayne’s curiosity. Wayne, however, is drawn to an outspoken activist who wants him to give the world a clean energy source, which Wayne just happens to have.

But Wayne knows that one man’s energy source is another man’s weapon, and he wants to keep his invention far from any who would misuse it.

Christopher Nolan sure knows how to tell a story several stories, in fact, and at the same time. There are so many stories within stories you might feel you are watching “Inception” again, tracking bits and pieces of different realities, wondering where each thread will lead.

That’s both the beauty and, from one point of view, the problem with the film. For a film with so much action in it, it was surprisingly talky. There was so much that needed to be explained and tied up neatly from the two previous installments that it felt like I was being inundated with information. While it kept my attention — I didn’t realize until I left the theater that I’d been sitting for three hours — I also felt a bit worn out by the end of it all.

Rush Limbaugh’s anger probably started with the name of the arch villain in this story, Bane, or Bain, if you are hearing it and not seeing it. But Sirota’s is the more valid point in that Bane, who espouses some of the “99 percent vs. 1 percent” rhetoric, is portrayed as a violent terrorist hell-bent on destroying the people of Gotham because who can really be innocent in such a city. That he gains power through violence separates him from the actual Occupiers, who have vigilantly practiced nonviolence.

One of the things I’ve loved about Christopher Nolan’s past films was how fresh and original and authentic they felt. This one felt a tad derivative in spots. I saw an idea lifted from “Die Hard,” a character with a mask lifted from “Star Wars” (complete with the Scuba-like breathing gear), and more. They weren’t carbon copies, of course. But they were too similar. I’ve come to expect more from the bar Nolan has set with his previous work. This just wasn’t as good.

The film is worth seeing for a couple of reasons alone, however: Christian Bale and Anne Hathaway. I have never particularly been a Bale fan, but he brings a smoldering intensity to this role that I found compelling. That was one of my complaints with so many characters and such a large story, Bale didn’t get nearly enough screen time.

Anne Hathaway is the perfect Catwoman. Sexy and surly, creative and cocky. She’s a hell of an opponent, or partner, depending on whose side you’re on. She also had some of the funnier lines, so her appearances lightened the otherwise heavy dialog.

Gary Oldman has a lot of screen time as Commissioner Gordon, but his character didn’t have much to do, emotionally or physically, which is a shame, as Oldman is so talented.  Similarly, Michael Caine (Alfred) and Morgan Freeman (Fox) made what could almost be described as cameos, when they had been such huge parts of the earlier films.

The film is worth seeing, but it’s nowhere near Best Picture material. I had hoped to really love it, to be blown away. But my thoughts as I left the theater were mirrored by a woman behind me, who responded to her male companion’s question “What did you think?” with “Eh, it was okay.” Parts of it were really interesting. But a lot of it was just, eh, okay.

← Lamenting the Dead, Not the Laws
The Long Night of Gun Violence →

6 comments for “Batman in an Age of Polarization”