Exclusive: Mitt Romney’s on a roll. He’s turned back suspicions about his curious departure from Bain Capital and blunted demands he release more tax returns. Now, as he surges in the polls, he’s twisted a comment by President Obama into a nasty attack ad and almost no one is objecting, writes Robert Parry.

It probably shouldn’t come as much of a surprise that the “independent fact-checkers” haven’t objected to Mitt Romney’s mendacious use of President Barack Obama’s comment about how public infrastructure helps business.

After rallying to Romney’s defense that he left Bain Capital in February 1999 despite scores of Bain documents listing him as still in charge for three more years the “fact-checkers” have pretty much gotten out of the way on the selectively edited Obama quote and let the right-wingers distort the comments any which way they want. 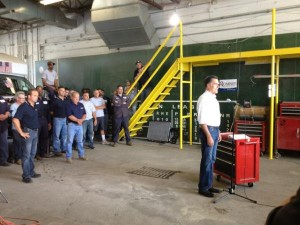 The key to this lie has been to strip away the context of Obama’s remarks so the “that” in his comment is applied to someone’s business when it’s clearly meant as a reference to roads, bridges and other public investments that facilitate American business (and have been part of the U.S. public/private partnership since the nation’s founding).

In a talk in Roanoke, Virginia, on July 13, Obama was describing the contributions that the public sector and earlier generations of Americans have made toward creating conditions to help today’s businesses succeed:

Though Obama’s syntax is slightly mangled, the context is obvious. Obama is saying that businesses did not build the roads, bridges and the Internet. In watching the actual clip, Obama’s meaning is even clearer.

But the right-wing media quickly lopped off the context. Fox News applied its classic selective editing to have Obama simply say, “If you’ve got a business, you didn’t build that.” Romney used the misleading quote in campaign ads and one of the Washington Post’s neocon columnists, Charles Krauthammer, fleshed the distortion out into a whole column.

Indeed, this distortion is now taking on the magnitude of what was done to Vice President Al Gore during Campaign 2000 when much of the press corps either went along with Republicans putting words in his mouth or blamed Gore for not defending himself better.

The most famous distortion of Gore was the apocryphal quote about him claiming to have “invented the Internet” when he never said that but there were other cases of his comments being twisted beyond recognition and then used as pretexts to analyze him as delusional. On Election Day, many voters told exit polls that they voted for Bush because they simply couldn’t trust Gore. [For details, see Neck Deep.]

Campaign reporters along with those “independent fact-checkers” appear to be reaching a similar tipping point in the Obama-Romney race. It was relatively safe for reporters to write critical stories about Romney when he was running in the Republican primaries because other Republicans were leveling the accusations, but now it’s different.

With the one-on-one match-up against a Democrat, a new set of rules takes effect. The smart play now is to go light on Romney (the Republican) no matter how outlandish his remarks and go hard against Obama (the Democrat) every chance you get. This unwritten code has been understood by journalists for the past couple of generations.

Despite what you may have heard from the right-wing talkers about the media’s “liberal bias,” the reality for several decades has been that mainstream journalists fear nothing more than being labeled “liberal” by the Right. Then the Right’s well-financed media attack groups target the branded reporters and their careers never recover.

Plus, the odds are that the executive who signs the reporter’s paycheck and decides who gets promoted or fired is a conservative or neoconservative. That’s true even at places like the Washington Post, which is often called “liberal” by the Right but is actually a bastion of neocon thought.

Since there’s no comparable threat from the Left, it makes all the career sense in the world to tilt your reporting to the right and avoid the possible loss of a job and income. You can even earn extra credit if you rile up liberals with your biased writing because it will come in handy if you ever do write something that offends the Right and you need to show “balance.”

Understanding this rule of American journalism helps explain why the “independent fact-checkers” and the likes of Post columnist Fareed Zakaria feel they must shield Romney from scrutiny about his mysterious “retroactive retirement” from Bain.

For instance, though Zakaria clearly has no detailed knowledge of the issue, he nevertheless wrote, “Whatever the paperwork shows, Mitt Romney was not running Bain Capital after February 1999.”

Zakaria then displayed his true ideological colors, toeing the Post’s editorial line, which for years has been enthusiastic about the supposed economic benefits of off-shoring American jobs. Zakaria added, “Even if he [Romney] had been [in charge], outsourcing jobs to lower a company’s costs, and ensure its survival, is not sleazy; it’s how you run a business efficiently. (Is President Obama suggesting that we put up tariff barriers to prevent outsourcing in the future?)”

That cavalier attitude about shipping U.S. manufacturing jobs to low-wage countries abroad has been neocon dogma for decades. Remember how all those smart people told us that we were entering a new “information age” in which industrial production was irrelevant and we should focus on devising stuff like new financial “instruments.” The 2008 financial collapse has done little to dent that doctrine.

In this political/media climate, one can expect that Romney will not only have an advantage in the avalanche of TV ads endlessly blaming Obama for the poor economy but will have that theme reinforced by the national press corps. Even many liberal talkers can’t resist repeating the self-fulfilling prophecy that the voters will punish Obama for the jobless rate.

There is, of course, a counter-narrative that is more interesting and accurate. It is whether the Republican plot hatched at the very start of the Obama presidency to make the U.S. economy “scream” by frustrating Obama’s jobs initiatives will succeed.

Though the U.S. press corps knows that the Republican-sabotage narrative is true it’s been reported, for instance, by author Robert Draper virtually every mainstream journalist knows intuitively not to mention it in the context of the struggling economy.

When poor jobs numbers come out, the journalists fall into line, saying this will hurt Obama’s reelection chances; they don’t say this is another result of the Republicans holding the U.S. economy hostage and trying to sabotage the President’s reelection.

Pile onto that the media’s timidity about simply correcting distortions, like Obama’s selectively edited quote regarding the importance of a public infrastructure for business success, and you have a good idea where the presidential campaign is headed over the next few months.

← Risk of Iran War Escalates
Lamenting the Dead, Not the Laws →

9 comments for “Advantage to Mr. Romney”