Exclusive: Mitt Romney is echoing a lie that has been rumbling through the right-wing echo chamber, a selectively edited comment by President Obama about how roads, bridges and other public spending help business. This is a classic case where “independent fact-checkers” could help out, writes Robert Parry.

The “independent fact-checkers” might want to dust off their Pinocchios and pull out their “truth-o-meters” in reaction to Mitt Romney’s latest calculated lie, applying deceptive editing to President Barack Obama’s remarks about how public infrastructure supports private enterprise.

This is a clear case where Romney and the right-wing media know what they’re doing. They clipped Obama’s remarks in such a way as to make it seem that the President was saying that business owners didn’t build their own businesses, when the comment actually refers to the building of roads and other public investments. 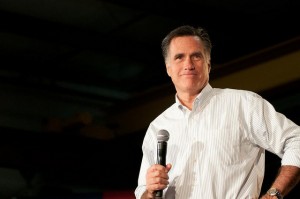 In a talk in Roanoke, Virginia, on July 13, Obama was describing the contributions that the public sector has made toward creating conditions that help businesses succeed:

Though Obama’s syntax is slightly mangled, the context is obvious. Obama is saying that businesses did not build the roads, bridges and the Internet. But the right-wing media quickly lopped off the context. Fox News applied its classic selective editing.

On Tuesday, Romney joined in, telling a rally in Pennsylvania that Obama “said this: ‘If you’ve got a business, you didn’t build that. Somebody else made that happen.’” Romney then extrapolated from this misleading quote that Obama wants Americans to be “ashamed of success” and that Obama is “changing the nature of America.”

“I find it extraordinary that a philosophy of that nature would be spoken by a president of the United States,” Romney said.

But Obama wasn’t saying that someone else built the business; he was saying someone else built “that,” i.e. the public infrastructure that businesses use. Given this clear context, Romney and other right-wing figures know exactly what they’re doing. They’re lying.

Yet, reflecting again how poorly the U.S. news media handles such distortions, the Washington Post reported Romney’s rendition of Obama’s statement without context or contradiction. The willful distortion by Romney was allowed to flow unchecked into the public discourse.

If there is a purpose for “fact-checkers,” it is for situations like this, where one candidate wrenches out of context a comment by another with the intention to mislead voters. It also is the responsibility of reporters and editors to supply context even in spot stories.

Where “fact-checkers” are less useful and indeed can be downright harmful is on larger and more nuanced questions, such as the one about Romney’s precise departure date from Bain Capital. In that case, Romney created confusion over when he left by signing a series of conflicting forms and making contradictory statements. [See Consortiumnews.com’s “Romney’s Fact-Checker Cover-up.”]

However, the Annenberg Public Policy Center’s FactCheck.org and the Washington Post’s Glenn Kessler chose to accept Romney’s latest assertion that he had nothing to do with Bain Capital after Feb. 11, 1999, when he left to work on the Winter Olympics.

FactCheck.org made a big point that Romney would have committed a felony if he lied on his campaign disclosure form, suggesting that the public should believe him because the potential penalty for filing a false statement would be so high.

FactCheck.org (and Kessler) stuck with that position even after the Obama campaign and many journalists brought forward dozens of Securities and Exchange Commission documents, including some signed by Romney, showing him to be Bain Capital’s owner, chief executive officer, chairman and controlling person.

Despite the obvious contradictions and the fact that is also a felony to make false statements to the SEC the “independent fact-checkers” took the position that the Obama campaign must prove to near 100 percent certainty that Romney actually was continuing to direct Bain Capital’s decisions after February 1999.

However, that evidence was beyond the reach of anyone outside of Romney’s inner circle and his Bain Capital associates and they were stonewalling requests for information like meeting minutes, phone-call records and recollections of Romney’s post-1999 contacts. Romney himself rebuffed media inquiries for details about conversations he might have had with Bain executives.

Thus, by giving Romney a pass and simply accepting his current self-serving claim, the “fact-checkers” became accomplices to a cover-up. Citing these “independent fact-checkers,” Romney stiffened his refusal to answer more questions or to provide more than his last two tax returns.

When I asked Kessler in an e-mail if he felt uncomfortable being used this way a “fact-checker” being exploited to cover up facts he responded by saying:

“I think you misunderstand my role. I vet political statements on a case by case basis, as do the other fact checkers. In the case of Romney’s departure from Bain, I have always maintained that 1999-2002 is a grey area. I have tended to say that transactions in which Romney was personally involved before 1999 are fair game, even if the bankruptcy (such as Ampad) came later.

“Romney could certainly clear this up by releasing more information, but in the meantime the Obama campaign has not provided enough evidence to back up claims of Romney being personally involved in deals post-1999. The burden really is on them since they are making the charge.”

Yet, the same point could be made about any investigation. You start out with some evidence, which especially in the face of stonewalling you can legitimately cite, even if there remain some unanswered questions. In this case, the Obama camp produced official Bain Capital filings with the SEC that contradicted Romney’s current claims.

If you went back four decades and looked at the Washington Post’s reporting on Watergate, you would see a similar pattern: President Richard Nixon and his White House insisted there was no cover-up while reporters Bob Woodward and Carl Bernstein kept uncovering contradictory pieces of evidence.

It wasn’t until the end of the process when Nixon was forced to disclose internal tapes that the mystery was solved. Nixon was lying and the Post was vindicated.

However, if Kessler’s standards had been applied, the earlier Post stories would have received four “Pinocchios” for a “whopper” because Woodward and Bernstein could not prove categorically a high-level White House cover-up. They had evidence pointing in that direction but it wasn’t ironclad.

So, Kessler and his fellow “fact-checkers” might want to reexamine how they operate. If they don’t consider themselves investigative reporters but rather people who simply “vet political statements” they should stick to a narrower set of parameters.

They certainly shouldn’t jump into the middle of a complex investigation and begin denouncing the investigators for not knowing everything that might conceivably be known. That only guarantees that the public never gets the full story. However, they might take issue with some dishonest selective editing.

← Reviving the Rendition Debate
How We’ve Earned Your Support →