Dressage or “horse ballet” may be the only equestrian competition that makes polo look like a working-class sport. But it is a favorite Romney family pastime, like lucrative fundraisers hosted by rich bankers under suspicion of financial crimes and looking for help from a future president, as Michael Winship reports.

So what do you get when you combine Mitt Romney, expensive horseflesh, fancy dinners and a financial scandal in the City of London? An interesting confluence of people and events that once again raises question about the wealthy Republican candidate’s ability to relate to ordinary Americans and highlights the overwhelming, caustic influence of big money in this year’s presidential race.

Two weeks ago, Mitt Romney told Bob Schieffer on CBS’ “Face the Nation” that he wouldn’t be joining his wife Ann at the London Summer Olympics to watch her champion dressage horse, Rafalca, compete. “I have a campaign to attend to,” Romney said, “so I won’t be able to see it perform, but I’m very pleased for [Ann].” 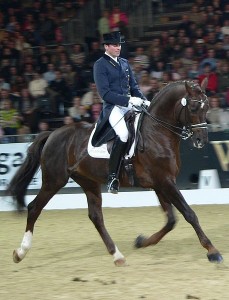 Dressage or "horse ballet" at the Summer Olympics will include a Romney-owned horse. (Photo credit: Benutzer:BS Thurner Hof)

Speculation has been that Romney’s campaign was wary of their candidate attending an upper-class equestrian happening that might only feed ongoing accusations of patrician elitism, accompanied by potentially ruinous photo-ops and endless late-night jokes, of which there already have been plenty just ask Stephen Colbert. The New York Times reported:

“As millions tune in to the Olympics in prime time this summer, just before Mr. Romney will be reintroducing himself to the nation at the Republican convention, viewers are likely to see ‘up close and personal’ segments on NBC about the Romneys and dressage, a sport of six-figure horses and $1,000 saddles. The Romneys declared a loss of $77,000 on their 2010 tax returns for the share in the care and feeding of Rafalca.”

But several media outlets, including the Times, CNN and the British newspaper The Telegraph have reported that Mitt Romney will in fact take time from the campaign to attend the opening ceremonies of the Olympics with his wife on July 27 (the Romney horse’s event begins Aug. 2). He was, after all, head of the 2002 Salt Lake City Winter Games. And an appearance at the opening, filled with extravagant special effects, music and patriotic flag-waving for the U.S. team, is safer than showing up at an event where your wife’s horse is worth several times the mean yearly per capita income for individuals in the United States.

So family loyalty is trumped by political expedience, but while in London, Romney will find time to attend, you guessed it, a private fundraising dinner. According to The Telegraph, “The price of invitations dwarfs the amounts paid for such fundraisers in British politics. Each guest must pay between $25,000 (£17,000) and $75,000 (£50,000) for a seat at the dinner, which will be hosted by Bob Diamond, the chief executive of Barclays.”

Bob Diamond? Why is that name familiar? Oh right, it was announced this week that Barclays would pay American and British authorities $453 million in fines as a settlement over allegations that the financial giant manipulated international interest rates, causing millions of borrowers to pay the wrong amount on their loans.

The New York Times reports, “At the height of the financial crisis, regulators say, the big British bank reported bogus figures that in some cases had influenced a benchmark for student loans, credit cards and mortgages.”

An ongoing Justice Department investigation of Barclays, as well as of other banks, including Citigroup, could lead to criminal charges. Calls have come for Diamond’s resignation. He responded by announcing that he would forego his annual bonus for the year, in 2011, Diamond received $4.2 million.

In a speech, British Labour Party leader Ed Miliband said, “This cannot be about a slap on the wrist, a fine and the forgoing of bonuses. When ordinary people break the law, they face charges, prosecution and punishment.”

But of course, ordinary people don’t host $75,000-a-plate dinners for the man who may be the next president of the United States.