President Obama rebranded the “global war on terror” the “war on Al Qaeda,” but his counterterrorism strategy hews closely to President George W. Bush’s, as the U.S. joins conflicts in Yemen and elsewhere that have little connection to the 9/11 attacks, as ex-CIA analyst Paul R. Pillar writes.

In a semi-annual report to Congress “consistent with” the War Powers Resolution (a formulation presidents use to abide by the resolution without conceding its constitutionality), President Obama last week acknowledged publicly for the first time that U.S. military forces have been engaged in “direct action” in Somalia and Yemen.

The report does not disclose anything that had not already been revealed in unofficial accounts, and the press was inclined to treat the matter as a secrecy issue, noting how grudgingly the administration has been saying anything about the operations involved. 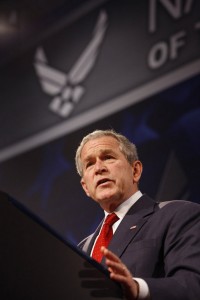 But the most important and disturbing aspect of this situation is not so much the secrecy but rather the fact that U.S. military forces are in effect engaging in undeclared hostilities with no effective limits, geographic, temporal or legal.

The ostensible authorization (also mentioned in last week’s report on a “consistent with” basis) for these uses of U.S. military forces is the brief resolution that Congress passed in the days immediately following 9/11.

More than a decade after 9/11, any connection between that terrorist attack and its perpetrators, on one hand, and U.S. military operations of today, on the other hand, is tenuous to say the least.

The continued loose usage of this resolution as an authorizing document comes close to saying that the president can use military force wherever and whenever he pleases as long as he is able to say it has something to do with terrorism.

Government lawyers have tried to make the justification of force not sound quite this loose by propounding the concept that the United States is waging war against an entity called “Al Qaeda.” That entity, the concept implies, is as distinct and identifiable a foe as any state would be and therefore constitutes a sound basis for delimiting an authorization to use military force.

Another facet of this concept is that because Al Qaeda operates globally, U.S. military force intended to combat it could be employed anywhere in the world. Some armed non-state groups may indeed have a clear and cohesive enough identity that they could be treated as foes for force-authorization purposes just as plausibly as a state could.

A current example might be another group that is mentioned in the president’s report and which a few dozen U.S. military personnel are helping to counter: Joseph Kony’s Lord’s Resistance Army in central Africa. But Al Qaeda, even if it once had that clear and cohesive an identity, no longer does.

The name “Al Qaeda” originally applied to an identifiable group, one led by Osama Bin Laden that conducted the 9/11 operation and certain other terrorist attacks. But that group is barely recognizable, in the form of remnants in the frontier area of northwest Pakistan, even if it is surrounded by some other groups that, although they may have similarly radical inclinations, are different entities.

Earlier this month, there was considerable crowing about the killing by a missile-equipped drone of the supposed occupant of the hot-seat job that used to be known as the “Al Qaeda number three”, and since the elimination of Bin Laden last year has been promoted to number two, with much commentary to the effect that there isn’t much of anything left to the command structure of this group besides the current leader, Ayman al-Zawahiri.

The evidence captured in the raid that killed Bin Laden a year ago showed that for some time he had been more of a source of exhortation to followers than a director or manager of an organization’s operations.

Al Qaeda, certainly given how that term is generally applied today, is less a group or organization than it is a brand name and a set of ideas. Those ideas are a combination of radical salafism, faith in the use of violence and animosity toward the United States.

To the extent there are personal or other types of ties between the remnants in South Asia and violent Islamist radicals elsewhere, there is not necessarily a correlation with use of the Al Qaeda name. Some have seen advantages in adopting that brand name, and others have not. Western use of the name covers a diffuse set of individuals, cells and groups with widely varying objectives even if they share to comparably varying degrees the Al Qaeda ideas.

In short, there is not a distinct entity called Al Qaeda that provides a sound basis for defining and delimiting an authorized use of military force. To say that we are “at war with Al Qaeda” is not at all comparable to declaring war on the Republic of Ruritania.

The shaky justification, used by each of the last two presidential administrations and leaning on a thin congressional expression passed amid the shock and anger right after a terrorist attack more than ten years ago, means we have been denied the sort of proper public debate and consideration that ought to precede any authorization to use military forces overseas.

That means defeating the sound purpose of the War Powers Resolution, regardless of what one may think about the constitutionality of that particular legislation. One reason such a debate and consideration is all the more important to have when U.S. forces get engaged in places such as Somalia and Yemen is that there is ample evidence, even if we limit our purview to counterterrorism, of how the application of U.S. military force can be counterproductive in breeding more radicalism, more anti-Americanism and more terrorists.

This has especially been an issue with the drone strikes, but it can also apply to military engagement on the ground, just as it has in Afghanistan.

Another reason the use of military force in such places as Somalia and Yemen needs the kind of careful preauthorization consideration that has been lacking is that employing force there means getting enmeshed in complicated local conflicts that can easily be no-win situations for the United States.

In both of those countries there are many different fault lines and animosities, such as the southern Yemeni resentment over northern domination ever since the two Yemens merged in 1990. The United States has an interest in Yemeni-based violence that can harm U.S. persons or property. It does not have a vital interest in most questions involving the internal ordering of Yemen itself.

Adding to the confusion about these issues is the increasingly sloppy use of the term “Al Qaeda”, by much of the Western press, among others, in describing events such as fighting in southern Yemen between Islamist insurgents and the government.

We read about “Al Qaeda” gaining or losing control of territory, as if street fighters trying to gain control of Jinzibar are the same people who build bombs to put aboard U.S. airliners. They aren’t the same people, notwithstanding the individual “links” that are habitually cited as the reason to apply the Al Qaeda label to people who really are more interested in who controls those streets in Jinzibar than in any of Bin Laden’s ideas about attacking the far enemy as a way to wage global jihad.

We probably also are seeing a consequence of the unrealistic American zero-tolerance standard of counterterrorism, combined with political opponents who are poised to pounce whenever that standard is not met.

President Obama and his counterterrorist aide John Brennan know the political consequences if an attack originating in Yemen takes place and opponents can charge that the administration did not do enough to prevent it with measures up to and including the use of military force.

The near-miss attempt to bomb a U.S. airliner in December 2009 weighs heavily on them. And thus U.S. force is being put to use in more conflict-ridden lands in ways that might kill a few more terrorists but also raise costs and risks that Congress and the American public have never carefully considered.

← All for One
WPost’s Kessler Earns 4 Pinocchios →