U.S. news correspondents often compete to cover Americans wars with an eye to making a name or building a career. But when the wars drag on or when problems are just festering the news media quickly loses interest, ironically setting the stage for more wars, as Danny Schechter writes.

Foreign correspondents have always been revered within journalism. That’s why covering Iraq or other wars are assignments so many reporters cultivate. Many see them as a ticket up the media pecking order.

Being “under fire” promises excitement, danger and, let’s face it, on TV , precious “face time.” Going overseas is often a route to more visibility and better jobs at home on the strength of your “bravery.” War reporting can be the macho oxygen of ambition. 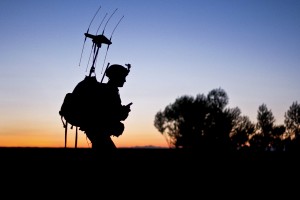 A paratrooper with the 82nd Airborne Division patrolling an Afghan village at dawn on May 4, 2012, as U.S. press interest in the war declines. (U.S. Army photo by Sgt. Michael J. MacLeod)

Just as covering a turbulent world is attractive in the ranks, up in the suites of media power  “foreign news” is, according to Michael Wolff, a ‘nostalgist’s beat’ said to turn off American audiences and tune them out. That’s why decision-makers shutter bureaus and redefine news of the world as news of American power in the world.  (They also realize financial savings by doing so, of course.)

In an age of globalization, as global news grows more important, it is covered less. The network challenge is how to appear to be covering the world without really covering it. Fox created “the world in a minute”; CNN countered with “the global minute.”

For our company Globalvision, now in its 25th year, this downgrading of international reporting represents a threat to our raison d’etre and very existence. When two “network refugees,” Rory O’ Connor (ex-PBS and CBS) and I (ex-CNN and ABC) launched our enterprise, we believed a changing world demanded more coverage beyond our borders. We saw it as a way to promote understanding, tolerance and peaceful change.

Our response to those who insist “Americans are not interested” was to demonstrate that audiences respond when programs are interesting. We gambled our careers on the notion that world affairs could make for compelling television when produced another way, from the inside out, and the bottom up, by collaborating with colleagues in other countries. We were driven by a moral imperative to document the inspiring struggle for human rights in South Africa and in other hotspots. We learned that telling untold stories moves audiences to care and to act.

We still believe that. And a world of journalists still knock on our door with fascinating stories we all need to know. That was especially true after the events of 9/11 demonstrated the consequences of ignoring grievances elsewhere on our planet. Why people hate us or love us or need us are still urgent themes.

Many polls show Americans want to know more about the world if only because, as a nation of immigrants, many of us have ties to other cultures or business entanglements overseas. Ask the producers of the popular TV newsmagazine “60 Minutes.” They’ll tell you that ratings do not dip when an international segment airs.

You would think that at a time like this, an experienced award-winning international media company like ours would be needed more than ever. Think again. Why? We face a three-sided axis of indifference.

First, in an age of media consolidation and big media rule, there is less room for maneuver by small, undercapitalized independents. Ventures like ours also find it harder to get our work seen because we’re driven by values that question the “bottom line is the only line” mentality of the cartels.

When the economy falters and foundations cut back, the whole indy media sector hangs on by a thread. We feel like ants in a field of elephants.

Second, despite proliferating media choices, there has been a narrowing of diverse voices. Networks increasingly clone each others’ conventional wisdom and look-alike formats. When I worked at ABC, we used to joke there was a “homogenizer” in the basement. All too often, homogenized substance-free TV news programs defines us.

In our unbrave media world, critically inflected proposals do not encounter censorship, just respectful assurances that the ideas are good but they are just,  sorry, “NFU — not for us.” Sadly, journalism itself is branded as old-fashioned by brand-building executives who insist on storytelling packaged in Hollywood-style narrative structure. For them, entertainment trumps information.

Third, when government and media marched in lockstep during the Iraq war, ideological diversity became conspicuous by its absence. On news program after news program, we heard and saw the same “experts,” the same conservative pundits, and the same narrowing of story framing.

Suddenly an amoeba-like  “Fox effect” infected the entire broadcast spectrum. When “patriotic correctness” dominates, there is an unwelcoming environment for diverse global perspectives, alternative explanations and critical voices. When simplistic “you’re either with us or against us” formulations are in, more complex interpretations are out. To survive you either dumb it down or get of town.

A decade ago, PBS told Globalvision that human rights was not a “sufficient organizing principle” for a TV series (unlike cooking!). We went on to produce four years of the hard-hitting series “Rights & Wrongs” anyway.  Recently, a PBS station that had been an ally told us that despite AIDS and SARS, a global health series is not a “sufficient organizing principle.” The very same words! The world may change but institutional attitudes don’t. Today we lack the resources to do it ourselves.

“Blaming the people” for the lack of world coverage is misplaced and easy; acknowledging responsibility demands self-examination and corrective action.

2 comments for “Setting the Stage for More Wars”