As Campaign 2012 shifts into high gear, American democracy is careening toward a crash with little protection against the outsized influence of Money, used to confuse the voters, and the downsized ability of Media to keep the public adequately informed, reports Danny Schechter.

I keep thinking of that clear April night 100 years ago when the unsinkable HMS Titanic steamed towards New York. It was actually on its way to dock just a few blocks from where I live at what are now the Chelsea Piers. There was a sense of optimism abroad as a new record for a speedy transatlantic passage was about to be set.

There was music, dancing and fine wine. That is, until they saw that iceberg high in the water. The captain and his mates were aware that 80 percent of it was underwater and out of sight. They didn’t react in time. 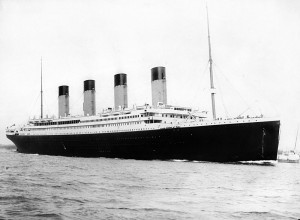 Everyone knows the story most recently recreated in 3D but the lesson is really not just about that great ship that went down, or even the company that bypassed safety regulations, or even the hubris of the owners whose greed sent so many passengers to that legendary “watery grave.” It was also about not seeing the dangers in front of us.

That’s the real story of this moment in our political lives, as the 2012 elections begin in earnest and we ignore, to our detriment, that vast iceberg of money, stacked in the billions, that threatens to sink what’s left of our democracy. It is hard to wrap your head around the scale and immediacy of this danger.

And it’s not just about the Citizens United decision of the Supreme Court. It’s about the way Democrats think and Republicans act. It’s about the growing way money has been allowed to dominate politics in a game both parties play.

It is an outgrowth of our vast economic inequality and the policies that promoted it. It’s about state laws limiting the franchise in the name of fighting voter fraud with so-called voter ID laws, and ordinary Americans becoming so tired of electoral lies and the arrogance of power that they don’t vote.

Mary Boyle, a vice president of Common Cause, is concerned about that: telling me, “one of the dangers, particularly around this campaign, is you read these headlines from people who aren’t really engaged in politics. You just read headlines about ‘super PACs raking in millions of dollars’ or ‘outside groups spending $10 million negative ads.

“And for a lot of Americans that’s just kind of background noise that makes them go, ‘Uh, they’re at it again.’ And it does make people cynical. It makes them tune out and that is a huge concern because then that leads to people not voting and that’s a bad thing.”

This information overload is a product of a media ecology that tunes us out and a news business that avoids truth at all costs. It’s about analysis that leads to paralysis and cynicism that allows political manipulators to prevail in league with a media system that simplifies, scandalizes and spins news to advance partisan agendas.

I recently sat in a lecture at the New School on “The Anatomy of Campaign Finance,” featuring two experts, Professor Jacob Hacker of Yale and journalist Joe Hagen who writes for New York magazine and described what he saw in Karl Rove’s living room. They painted s picture of a vast organizational imbalance between the parties.

The lectures took place on May Day just as the impressive citizen “armies” of Occupy Wall Street were leaving Union Square for the trek to Wall Street. President Obama’s funding base is not, said Hacker, even comparable to the treasure chest that Rove has mobilized.

One factor: The Bush tax cuts have permitted the Right to amass a major war chest, in part, because the average Republican-leaning millionaire became $300,000 to $500,000 richer; 53 percent of all after-tax gains went to the super-rich, the top one-tenth of 1 percent; 60 percent of corporate money comes from the finance sector

The beneficiaries of this transfer of wealth to the top understood that their windfall came about through politics, and, to keep it, they have to invest more in politics. Says Hacker, “Everyone can vote but not everyone can donate. Money changes the relationship between the politicians and donors. Money has a distortion effect on what politicians focus on.”

This is why Obama’s former chief of staff and now Chicago Mayor Rahm Emanuel said famously, you need three things to win in politics: Money, Money and Money.

Chicago magazine explained his well-honed technique back when Emanuel worked for Bill Clinton:

“Here’s how to be the most effective fund-raiser in politics today: Plaster a phone to your ear. Speak rapidly, in barely restrained tones of impassioned outrage. Tell the important person on the other end of the line that the large check he’s just written for your candidate’s campaign isn’t large enough. Say this: “Five thousand dollars? You, you, you, I wouldn’t embarrass you by having it listed that you only gave $5,000? You’re a $25,000 person; better to give nothing and say you were out of town. If you want to give $5,000, fine, but don’t call me when people start asking you if you’re going bankrupt. People of your stature are giving $50,000.”

The Republicans have more donors in it for the ideology, not the ego. They don’t have to be begged. Their greed, animus towards Obama, and sense of self-interest is their driver.

The effect of all this money has been different for Democrats and Rcpublicans, says Professor Hacker. Repubs have moved further to the Right than Dems to the Left. Money is not neutral in effects. Republicans have been emboldened.

On the basis of his reporting, Hagen notes how politics has become an industry with an orientation towards raising and managing money. It deploys its millions not only supporting candidates but backing the disciplined infrastructure led by professional political consultants who plan the strategies and run the show, coordinating the Super PACs and orchestrating the troops. This fraternity, he says, convinces politicians that this expertise is the “tool” the politicians need to win. So, these experts get paid huge amounts of money.

Hagan says that together they form a “presidential election industrial complex.” He says its key point is how to destroy opponents with opposition research driving negative ads and vitriolic campaigns.

That’s the view of one academic and one journalist. But what about the people who are monitoring this madness, like Sheila Krumholz, the director of The Center for Responsive Politics, who posts data about money in politics on the must-read website, OpenSecrets.org.

She told me recently, “There’s been a seismic shift in money’s influence in politics and on legislation and policy, ultimately. Primarily because of the Citizens United decision taken by the Supreme Court in January of 2010, which opened wide the floodgates on money and for the first time arguably in decades or even a century allows this money to come directly from corporate and labor union treasuries trade associations to be spent to influence the election of federal candidates.”

I asked her, “Does this mean that American voters have less and less influence on what’s actually happening in America?”

Her response: “It certainly means that American voters have less information about the organizations which are trying to influence who wins office, and ultimately what laws get passed. Does it then take away some of the influence that they have? Yes, because they’re making decisions in the dark.”

And there we are, back in the dark as the iceberg looms and many of us want to look the other way,

News Dissector Danny Schechter blogs at Newsdissector.net. He is the author of the just published collection of his writings, Blogothon, published by Cosimo Books. He hosts News Dissector Radio on Progressive Radio Network (PRN.fm) Fridays at 1 PM. Comments to dissector@mediachannel.org

11 comments for “US Democracy’s Looming Iceberg”