Historically, ardent Christians have been among the most bloodthirsty of religious believers, justifying wars and genocides around the world, ironically, in the name of Jesus, an avowed pacifist. Now, many devout Christians rally to Israel’s side in its ethnic cleansing of Palestinians from the Holy Land, Lawrence Davidson notes.

On March 18, Pastor John Hagee’s Christians United For Israel, an organization founded in 2006 with the goal of “realizing the political potential of tens of millions of evangelical Americans who support Israel,” announced the registration of its millionth member.

CUFI, which has as much influence with the Republican-controlled Congress as does the Jewish Zionist lobby AIPAC, can also be said to have the goal of destroying, in the name of God no less, the legitimate political aspiration of Palestinian statehood. 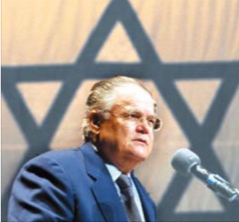 Why should the devout Mr. Hagee and his one million followers be so enamored of Israel? Actually, they have no rational reasons, but they do have a number of non-rational ones. For example, “We support Israel because all other nations were created by an act of man, but Israel was created by an act of God.”

Hagee and his followers do not know that this is so. They just ardently believe it is so. Yet there is a difference between demonstrable fact and belief. Though such religious beliefs are often presented as immutable unchanging over time what people ardently believe, what might be called faith, actually has proven to be widely variable demonstrating profound changes over the centuries.

Thus, for a considerably longer period of time than the life of Hagee’s particular brand of Christianity (in fact for thousands of years), vast numbers of people ardently believed in the reality of Olympian and other mythical gods. For almost 1,200 years, countless individuals, every bit as assured of their faith as Pastor Hagee is of his, came to the shrine at Delphi to prey to Apollo and, through his oracle, the Sibyl, petition for the God’s advice and favor.

There is no more hard evidence for Hagee’s faith than for that of the Sibyl. It’s like the lottery. Despite people’s belief in their own “lucky numbers,” every number has an equal probability of turning up. In the same way, when John Hagee dies, he has an equal chance of finding himself on the shore of the River Styx as he does at the gates of heaven or hell.

Of course, this comparison is not completely accurate. There is also the chance some would say a certainty that no number turns up at all, and Mr. Hagee, like all living things, simply dissolves into worm food.

Whatever Hagee and his followers may believe, there is no hard evidence that Israel was created “by an act of God.” The Bible stories are just that, stories, and quoting them as if they constituted evidence beyond the realm of faith just won’t do. (As for modern Israel, the deed was done by a combination of Jewish militias, the British Empire and the General Assembly of the United Nations.)

Today, no one credits the stories told in Hesiod’s Theogony (the story of the origin of the Olympian Gods) as proof positive of the existence of Zeus and Apollo. Pastor Hagee would counter that the Theogony was “created by an act of man” while the Bible is, allegedly, the divinely inspired words of God. And, indeed, it appears that up to one-third of the adults in the United States agree with him.

Unfortunately, it is quite possible that as high a percentage of people now believe in the literal, divine truth of the Bible (and therefore the divine origin of Israel) as people once believed in the reality of Zeus and his Olympian clan. However, it bears repeating that belief, no matter how ardently held, does not make something true. And, it does not matter if it is the belief of one person or a million. The situation is the same. Faith is not the same as fact.

Unfortunately, this does not put an end to our subject. Faith may not move mountains but it can move the masses. It can move Hagee’s million and many others to actions that are very real indeed. It can move people to empty their wallets in an effort to financially support their alleged certainties. Worse yet, it can move them to take up arms and slaughter their neighbors or at least cheer on others who do so.

I have a strong suspicion that if the Israelis some day evict every last Palestinian from Pastor Hagee’s “Holy Land,” killing thousands in the process, the pastor will shout “Hallelujah” and salivate in anticipation of the Second Coming of Christ.

It may just be his personal opinion, mind you, but if you believe so strongly that you are willing to underwrite murder and mayhem, you constitute a real danger to world peace. As such you should be preaching your defense before the International Criminal Court rather than spurring on the multitude.

← Mike Wallace: Death of an Icon
Are Drugs Behind Dementia Epidemic? →