The Occupy Wall Street movement has resisted making specific proposals for reform, focusing instead on its trademark occupation of parks and its protests on behalf of the 99 percent. Some longtime activists now urge OWS to “go left,” but Danny Schechter says it also much broaden its reach to that 99 percent.

For years, in the last century, when I was in school and learning about the early days of journalism, we were taught that author Horace Greeley who founded the New York Herald Tribune, was famous for saying, “Go West Young Man And Grow Up With The Country.”

One problem, as we learned recently, he didn’t coin the phrase but only popularized it. (Another media mistake involving a top dog in the media!) Indiana newspaper writer John Soule actually gave the advice in 1851, and it would serve as the mantra for 19th century “action” in the form of Westward migration. 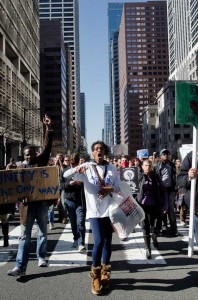 These days, the men and women who won their struggle stripes in the civil rights and anti-Vietnam war movements have a new mantra for action. Some who recently appeared at New York’s annual Left Forum, were sharing it with younger people, “Go Left.”

They would probably agree with Mitt Romney who said recently he can’t think of any reason for any young person to support a Democrat — but for different reasons. Those who are going Left have left the Democrats behind.

Even Bruce Springsteen, who campaigned for President Obama and played at his Inauguration, is setting his sights beyond modest reforms. He recently told a music festival in Texas about the first songs he loved, playing a bit of “We Gotta Get Out of This Place”: “They were a revelation the first records of full-blown class consciousness I ever heard.”

After reaching the line, “there’s a better life for me and you,” he added, “That’s every song I’ve ever written. That’s all of them. I’m not kidding, either. ‘Born to Run,’ ‘Born in the USA,’ everything I’ve done for the past 40 years, including all the new ones. That was the first time I felt I heard something cross the radio that mirrored my home life, my childhood.”

Many of today’s more conscious young people seem to be gravitating not into traditional radical class consciousness but into the ranks of the Occupy Movement, even as the movement’s main tactic seems stuck on liberating public space, not organizing youth or other communities.

Their philosophy of “horizontalism” has been effective in inspiring young activists because of its small-d democratic and participatory ethic. Yet, this process to many seems more important than the product or result. Propelling an “action faction” or camping as a community is not the same thing as challenging power or remaking it.

Clashes with the police play right into their hands when the story becomes one of confrontation, not pursuing a clear political agenda. The media’s love of “when it bleeds, it leads” is well known.

The Occupy Wall Street website reports: “After the brutal attack on the attempted re-occupation of Liberty Square by NYPD on the 6-month anniversary of #OWS, a number of Occupiers have relocated their base of occupation to Union Square in midtown Manhattan, a point of convergence for several #OWS protests over the past 6 months.

“According to reports on the ground, several dozen people slept in the park after the illegal and violent raid on Liberty Square. Over 70 people remain, now on Day 3. Although tents and tables are still banned, Occupiers have brought blankets and sleeping gear. Many are calling it ‘The New Occupation.’

“In addition to holding General Assemblies, Union Square Occupiers are providing vital jail support for those arrested on #M17 as they are released from NYPD custody. So far, the NYPD has made no attempt to remove Occupiers or prevent them from sleeping in the park.

“Our ability to occupy the commons in order to voice dissent is a vital political right. We do not need a permit to exist in public space. We call on all those who would stand for equality, justice, and liberation – and against the banks, corporations, wealthy elites, and corrupt politicians who have stolen our democracy and ruined our economy – to join us now.”

Yes, but why the continuing focus on a return to the parks?  The problem seems obvious. When a movement becomes focused on itself, when it seems to have only one tactic, it loses contact with the people it is fighting with and for. Building community is critical but so is building alliances and encouraging organization as a means for fighting back.

Saying “We Are The 99%” doesn’t make it so unless there is a way for new people to get engaged. Not everyone has the time or the disposition to stand through hours of General Assembly meetings that can be unproductive.

Some of the movement’s sympathizers are working or have family responsibilities. The OWS work groups are important but there needs to be more coordination with other direct action and community groups, not just more inward facilitation.

Not everyone believes in leaderlessness. Cultural styles and generational choices can be divisive as well as unifying. Not everyone is on Facebook or tweets. We can’t be fetishistic about one way being the only way!

How about a broader campaign to place stories in community papers, even “shoppers,” write letters to the editors and challenge media outlets that distort the movement’s outlook? How about speaker’s committees to book an OWS presence at churches, union meetings and conventions?

Can’t we find ways to broaden/diversify the tent and also make it bigger so others are more comfortable being involved? Can’t we more effectively occupy the mainstream so that 99 percent we say we speak for can speak for themselves?

And why can’t Occupy also borrow a page from digital activists like the people behind the Kony 2012 campaign. Whatever you think of its politics, it reached tens of millions of people. We can do the same and come up with our own media for better outreach.

The Occupy Newspaper and related journals offer one direction. The new OWS radio show is another way to make media, not just respond to questions from mainstream press. Why aren’t we holding screenings of the many documentaries made about OWS and the issues it is raising?

Spring is here. but we don’t have to fall back to what was done in the fall. It’s a time to move forward, experiment with more configurations of action and make the OWS presence felt in more arenas of public life.

2 comments for “Is ‘Going Left’ Right for OWS?”