The massacre of 16 Afghans, including nine children, allegedly by a deranged U.S. Army sergeant has stirred more anger toward the decade-long, U.S.-led occupation of Afghanistan, but it also underscores how the stresses of endless war are shattering the psyches of combat soldiers, as Democracy Now’s Amy Goodman notes.

We may never know what drove a U.S. Army staff sergeant to head out into the Afghan night and allegedly murder at least 16 civilians in their homes, among them nine children and three women.

The massacre near Belambai, in Kandahar, Afghanistan, has shocked the world and intensified the calls for an end to the longest war in U.S. history. The attack has been called tragic, which it surely is. But when Afghans attack U.S. forces, they are called “terrorists.” That is, perhaps, the inconsistency at the core of U.S. policy, that democracy can be delivered through the barrel of a gun, that terrorism can be fought by terrorizing a nation. 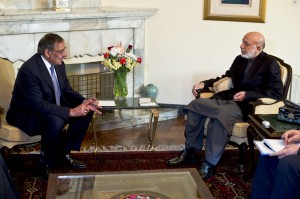 “I did it,” the alleged mass murderer said as he returned to the forward operating base outside Kandahar, that southern city called the “heartland of the Taliban.” He is said to have left the base at 3 a.m. and walked to three nearby homes, methodically killing those inside.

One farmer, Abdul Samad, was away at the time. His wife, four sons, and four daughters were killed. Some of the victims had been stabbed, some set on fire. Samad told The New York Times, “Our government told us to come back to the village, and then they let the Americans kill us.”

The massacre follows massive protests against the U.S. military’s burning of copies of the Quran, which followed the video showing U.S. Marines urinating on the corpses of Afghans. Two years earlier, the notorious “kill team” of U.S. soldiers that murdered Afghan civilians for sport, posing for gruesome photos with the corpses and cutting off fingers and other body parts as trophies, also was based near Kandahar.

In response, Defense Secretary Leon Panetta rolled out a string of cliches, reminding us that “war is hell.” Panetta visited Camp Leatherneck in Helmand province, near Kandahar, this week on a previously scheduled trip that coincidentally fell days after the massacre.

The 200 Marines invited to hear him speak were forced to leave their weapons outside the tent. NBC News reported that such instructions were “highly unusual,” as Marines are said to always have weapons on hand in a war zone. Earlier, upon his arrival, a stolen truck raced across the landing strip toward his plane, and the driver leapt out of the cab, on fire, in an apparent attack.

The violence doesn’t just happen in the war zone. Back in the U.S., the wounds of war are manifesting in increasingly cruel ways.

The 38-year-old staff sergeant who allegedly committed the massacre was from Joint Base Lewis-McChord (JBLM), a sprawling military facility near Tacoma, Wash., that has been described by Stars and Stripes newspaper as “the most troubled base in the military” and, more recently, as “on the brink.” 2011 marked a record for soldier suicides there. The base also was the home for the “kill team.”

The Seattle Times reported earlier this month that 285 patients at JBLM’s Madigan Army Medical Center had their post-traumatic stress disorder diagnoses inexplicably reversed by a forensic psychiatric screening team. The reversals are now under investigation due to concerns they were partly motivated by a desire to avoid paying those who qualify for medical benefits.

Kevin Baker was also a staff sergeant in the U.S. Army, stationed at Fort Lewis. After two deployments to Iraq, he refused a third after being denied a PTSD diagnosis. He began organizing to bring the troops home. He told me:

“If a soldier is wounded on a battlefield in combat, and they’re bleeding to death, and an officer orders that person to not receive medical attention, costing that service member their life, that officer would be found guilty of dereliction of duty and possibly murder.

“But when that happens in the U.S., when that happens for soldiers that are going to seek help, and officers are ordering not a clear diagnosis for PTSD and essentially denying them that metaphoric tourniquet, real psychological help, and the soldier ends up suffering internally to the point of taking their own life or somebody else’s life, then these officers and this military and the Pentagon has to be held responsible for these atrocities.”

While too late to save Abdul Samad’s family, Baker’s group, March Forward!, along with Iraq Veterans Against the War’s “Operation Recovery,” which seeks to ban the deployment of troops already suffering from PTSD, may well help end the disastrous, terrorizing occupation of Afghanistan.

Amy Goodman is the host of “Democracy Now!,” a daily international TV/radio news hour airing on more than 1,000 stations in North America. She is the author of Breaking the Sound Barrier, recently released in paperback and now a New York Times best-seller.