Exclusive: The prosecution of Pvt. Bradley Manning for inconvenient truth-telling is more proof of how hypocritical Official Washington is, especially when Manning’s case is compared to how Bush administration officials walked despite clear evidence that they sanctioned torture and other war crimes, notes ex-CIA analyst Ray McGovern.

When I was asked to speak at Saturday’s rally at Fort Meade in support of Pvt. Bradley Manning, I wondered how I might provide some context around what Manning is alleged to have done.

(In my talk, so as not to think I had to insert the word “alleged” into every sentence, I asked for unanimous consent to using the indicative rather than the subjunctive mood.) 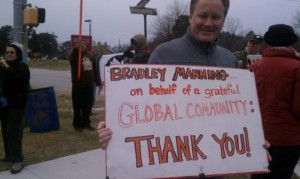 What jumped into my mind was the letter Rev. Martin Luther King Jr. wrote from the Birmingham City jail in April 1963, from which I remembered this:

“Like a boil that can never be cured as long as it is covered up, but must be opened with all its pus-flowing ugliness to the natural medicines of air and light, injustice must likewise be exposed, with all of the tension its exposing creates, to the light of human conscience and the air of national opinion before it can be cured.”

I suggested that this is precisely what Bradley Manning did when he saw the need to uncover war crimes like the indiscriminate murder of civilians and torture he witnessed in Baghdad and read about in cables.

What he had become witness to was the inevitable result of aggressive war, which the post-World War II Nuremberg Tribunal called the “supreme international crime,” differing from other war crimes only inasmuch as it contains within itself the “accumulated evil of the whole.” Was he to obey orders to keep his mouth shut? Or was he to follow his conscience and lance this ugly boil of accumulated evil?

What I especially admire in Bradley Manning is this: his ability, at the age of 22, to discern that there can be a hierarchy of, sometimes conflicting, values, and that from a moral standpoint some values dwarf others in importance.

Apparently, Manning saw in ending the mindless slaughter of aggressive war, with its accumulated evil, its torture and other pus-flowing ugliness, what ethicists define as a “supervening value,” one that outweighs lesser values like keeping a secrecy promise required as a condition of employment.

Manning chose to break that promise. And Dr. King, in his Letter from the Birmingham Jail, addressed something analogous. King insisted “an individual who breaks a law that conscience tells him is unjust,” and risks jail in order “to arouse the conscience of the community over its injustice, is in reality expressing the very highest respect for law.”

Bradley Manning’s courage hits a personal nerve in me. At age 28, I had an opportunity to blow the whistle on the lies of the senior U.S. military in Saigon. The evidence was documentary (a SECRET/EYES ONLY cable from Saigon); indeed, it was hard for me to believe the generals would put their deceit so explicitly in writing, but they did.

Younger readers need to be reminded that, at the time (August 1967) there was no WikiLeaks, but The New York Times was an independent newspaper prone to publishing documentary evidence critical of the government. The Times had not yet gotten into the habit of seeking prior approval from the White House.

Six years older than Bradley Manning was when he summoned the courage to do the right thing, and with college courses in ethics in my moral quiver, I nonetheless, well, quivered.

I blew a unique opportunity to let Americans know that, duty, honor, country be damned, unconscionable corruption at senior levels in Saigon and in Washington had badly misled us on the war and that our GIs and the Vietnamese were being chewed up in a March of Folly.

And that opportunity came months before so many got chewed up in the January-February 1968 Communist countrywide offensive, ushering in the second half of the bloody war in Vietnam. I discussed this last year, in connection with the WikiLeaks disclosures. [See Consortiumnews.com’s “How the Truth Can Save Lives.”]

As for Bradley Manning, he would not sequester himself in a moral vacuum. He had the insight and summoned the moral courage to follow his conscience and act with integrity.

In his correspondence with Adrian Lamo, the man who betrayed him, Manning said he wanted people “to see the truth, because without information you cannot make informed decisions as a public.” He wrote that he hoped his disclosures would lead to “world-wide discussion, debate, and reform.”

Manning’s first disclosure that came to light was the Apache helicopter gun-barrel video, with sound, showing the indiscriminate murder of a dozen Iraqi civilians, including two Reuters journalists and the wounding of two little children. The incident was duly “investigated” by the Army, and the shooting was deemed to be consistent with what is permitted by the Army’s Rules of Engagement.

Whoa! Official Washington cannot tolerate such disclosures if it remains intent on waging aggressive war, with its accumulated evil, in secret. So the Obama administration set out to make Bradley Manning an object lesson about what will happen to anyone tempted to divulge these sorts of secrets.

For such truth-telling, this is what you can expect: solitary confinement, cruel, inhuman, and degrading punishment; and a very long wait before being brought to the military pre-trial charade that I watched with others at Fort Meade, Maryland, last weekend.

President Barack Obama, commander-in-chief of Bradley Manning, and those trying him have already said Manning “broke the law” and be damned with the countervailing moral imperative of truth-telling when faced with clear evidence of unpunished war crimes.

Command influence, anyone? What’s wrong with this picture? Quick. Someone explain to me how those subordinate to the commander-in-chief can be expected to hold an impartial inquiry, since they already know Manning “broke the law.” The top boss said so.

What About the Damage?

Still, whatever the measure of Manning’s technical “guilt,” the government’s hand-wringing over the alleged damage from the disclosures of diplomatic cables has been “significantly overwrought.” How do we know? Defense Secretary Robert Gates said so, in those words. And this time he was telling the truth.

Gates mocked the professional alarums sounded by officialdom and dismissed the negative impact of the disclosed cables as “fairly modest.” He had learned a lesson from the earlier WikiLeaks disclosures of documents about Afghanistan and Iraq, when normally sober folks like Chairman of the Joint Chiefs Mike Mullen were accusing Manning of having “blood on his hands.”

When Sen. Carl Levin, Chair of the Armed Services Committee, asked Gates to provide proof in writing of such claims, Gates could adduce no evidence that actual people, as opposed to reputations, had been harmed.

It’s also instructive to see how selective prosecutions work in Official Washington. Manning may face life imprisonment for exposing the slaughter of civilians and other serious crimes (as well as revealing the absurd over-classification of U.S. government documents).

However, when President George W. Bush and Vice President Dick Cheney confess that they ordered waterboarding and other acts that have long been regarded as illegal torture, they and their subordinates are spared prosecution, presumably because to do otherwise would stir up a political mess.

Suddenly, clear violations of the law must be set aside as being outweighed by larger national considerations, i.e. political comity in Washington. But no such balancing act is available to spare Pvt. Manning possible life imprisonment for truth-telling, even when many experts believe much good has come from the disclosures, including inspiration for the Arab Spring’s ouster of dictators whose brutality and corruption were frankly described in the WikiLeaks cables.

Daniel Ellsberg has called Bradley Manning a hero, and that’s what he is. We need to find ways to tell the American people the full story. These days, they are not going to get the whole truth (or anything close to it) from The New York Times.

Ray McGovern works with Tell the Word, a publishing arm of the ecumenical Church of the Saviour in inner-city Washington. A 30-year veteran of intelligence work in the Army and the CIA, he now serves on the Standing Group of Veteran Intelligence Professionals for Sanity (VIPS).

← Meaning of the War Over Christmas
Catholic Bishops vs. Women’s Rights →

15 comments for “Pvt. Manning and Imperative of Truth”