It is an inconvenient truth for mainstream and right-wing Christians that Jesus was crucified for taking his protest against income inequality to the power center of Jerusalem, where he challenged how money had perverted religious principles. Now, that tension is returning with the Occupy protests, Rev. Howard Bess says.

St. Paul’s Cathedral in London is a magnificent building. Visitors swarm to visit this 400-year-old architectural wonder that is known as England’s Cathedral. Until recently people did not take note that it was located in London’s financial district, where it seemed God and mammon existed quite comfortably next door to each other.

Then came the protesters. The Occupy Wall Street movement has not simply spread all across America. It is a worldwide protest movement that covers the globe. More and more people of conscience do not believe that the wealth of the world should be controlled by a relatively small group of greedy, selfish super-rich.

In Christian teaching, greed is one of the seven deadly sins. From a more secular point-of-view, few believe that billions should live in poverty while the elite rich live in flagrant luxury.

When the protesters arrived in The City (as London’s financial district is known), their banners read “Occupy London Stock Exchange” and they encountered London police, who protected the banks and trading houses, as expected. 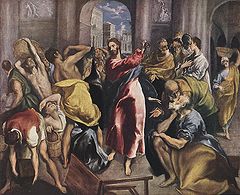 Jesus driving money-changers from the Temple, as depicted by El Greco

However, when the protesters took over the spacious courtyards of England’s Cathedral, another dynamic emerged. After all, Jesus was a protester in the courtyard of Jerusalem’s great Temple where he disrupted the business of the money-changers. Now, two millennia later, a new tension between Christianity and excess wealth was arising. [See Consortiumnews.com’s “Would Jesus Join the Occupy Protests?”

It takes a lot of money to support an operation like St. Paul’s. The Cathedral collects fees from it visitors and sells them memorabilia of their experience, clearing about $25,000 a day for those sources of income.

In an unintended consequence, the protesters shut down the entire operation, sending losses of income into hundreds of thousands of dollars. The graffiti they painted on the walls of the Cathedral was very upsetting, too. Probably as disturbing as Jesus overturning the money tables in Jerusalem’s Temple.

Should England’s Cathedral resort to calling in the London police? Should the Episcopalian authorities try to negotiate with their newest neighbors? Should their uninvited guests be allowed to use the Cathedral’s restrooms?

The Cathedral’s vacillation is recorded in their daily news releases. The Dean of the Cathedral has resigned. So also have other staff members. For the present, the Cathedral has decided to allow the protesters to stay through the end of the year. The final chapter has not been written. The conflict between God and mammon can become very real. (A similar standoff is developing between the ousted Occupy Wall Street protesters and Trinity Church in Lower Manhattan over a potential new protest site on church-owned Duarte Square.)

I confess that I would not have taken any note of the drama in London were it not for a friend of mine, Owen Vigeon, a retired Episcopal priest, who lives in London. Owen is a very fine poet who occasionally sends me some of his work. I like poetry, but I love poets.

I am reminded that almost all of the Old Testament prophets were poets. Poets can effectively speak truth in a way that mere preachers or politicians can never master. They say things so very nicely until you really think about it.

Owen sent me his latest poem. It is obviously inspired by the occupation of St. Paul’s. I am privileged to share it with you all:

MAGNIFICAT OF THE PROTESTERS 2011

A Song of the Word Made Flesh

When I pitched my tent in the human race

And stirred in my mother’s womb,

Her soul was roused to prophetic grace

As she warned of impending doom.

When the mighty will lose their seat and power

And the meek and humble joyfully flower.

When the rag tag and bobtail pitched their tents

To register their discontents

To know what ought to happen next

And truth to tell the English nation

Showed both disgust and admiration.

Yet in Cathedrals everywhere

There hung on the November air

The echo of My Mother’s prayer

That tells what Heaven thinks is “fair.”

Each waft of Chorus Evensong

Who stuffs the hungry with bonus pay

While the rich he is sending empty away.

This, as My Dad confirms to me,

Til then I fear My Mother’s vision

Will still be met with indecision.

But those whose banner now display

The motto “WHAT WOULD JESUS SAY?”

Had better learn the gospel truth

Which I have practiced since my youth.

Whatever the questions you may have selected,

My answers will always be quite unexpected.

Merry Christmas to all.

← The Rise of Islamist Democracy
‘It’s So Not Over,’ Say Occupy Protests →

14 comments for “Occupying Jesus and His Church”