Tea Party leaders have joined Fox News in ridiculing Occupy Wall Street while calling for even  less regulation of the banks and still lower taxes on the rich but Irving Wesley Hall is one Tea Partier who is questioning these “leaders” and finding common ground with the anti-Wall Street protests.

I encourage my fellow Tea Partiers to reach out to their neighbors in Occupy Wall Street. We’re on the same side.

Supporters of the Norwich and Otsego County Tea Parties [in central New York] will remember me. In 2009, we hit the streets together over shared outrage at the bipartisan $800 billion taxpayer bailout of Wall Street.  I presented the Memorial Day keynote address from the grandstand in Norwich’s community park. 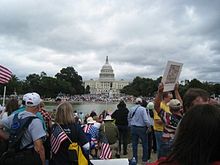 The following Independence Day I mounted the hay wagon in front of Losie’s Gun Shop on Route 23 in Oneonta to address the Otsego Tea Party about taking back America. The Oneonta, New York, Daily Star published my speech as “What’s Good for GM Is Now Good for China.” As a member of the Southern Tier Tea Party in Binghamton I made a similar presentation in 2011.

My point was simple. The problem is not big federal government but Wall Street’s financial stranglehold on our government.

I compared the power of the East India Company of Boston Tea Party fame to Goldman Sachs today, although the former at least profited from tea, while today’s investment bankers profit primarily off other people’s money.

In the cold winter of 1773 our patriots attacked the ships of the East India Company because, like Goldman Sachs today, it was a transnational monopoly that avoided taxes. How? King George III was a shareholder.

Despite this cruel profiteering, folks in Central New York still believed in the American Dream.   We worked hard, sacrificed and saved our dollars, but Wall Street stole our savings and pensions through the 401(k) scam.

We worked even harder but were forced to borrow and mortgage for our kids’ educations, medical bills and, often, basic necessities. Then Wall Street ripped us off again with the subprime mortgage scam, credit card rip-offs and college loan racket.

They’re sucking the life out of us, young, old and in-between.

I warned my fellow Tea Partiers that soon we elders would have nothing left but Social Security and Medicare. However, I could not have predicted in 2009 that “we” would “win” the 2010 election and Fox News would feature so-called “Tea Party” Republicans trying to help Wall Street scam Social Security and destroy Medicare, too.

Where did all our money go? The total aggregate wealth in the U.S. is around $75 trillion. The top 1 percent own roughly 40 percent of that amount. The remaining 60 percent is shared unequally among the other 300 million of us.

Did you know that the average Bush-Obama tax cut for one of the richest 1 percent was greater than the average annual income of one of the remaining 99 percent? The nominal value of all Wall Street derivatives contracts is $600 trillion.

Yet Fox’s callused “Tea Party” Republicans have the nerve to demand that we starve our elderly poor to rescue our desperate flood victims!

I warned my Tea Party neighbors in 2009 that Fox News was not a reliable source of information. Most of the corporate media represent the interests and views of Wall Street. Bank and corporate directorates are interlocked. But Fox pushed an extreme agenda on the Tea Party, tragically with success.

We may be advanced in years, but have we lost all memory?

Since the Occupy Wall Street demonstrations started on Sept. 17, some Tea Partiers have turned off Fox News and begun to consult other sources of information besides the corporate media. After all, didn’t the Tea Party start the protests against Wall Street?

But I regret to say that Fox still has a few of us folks convinced that black is white and white is black. How else can we explain how they convinced us in 2009 that Wall Street was out of control, but in 2011 they’ve convinced us that the toothless Dodd-Frank Wall Street regulations are a communist plot?

Unionized public workers were the heroes of 9/11. Now according to Fox’s millionaire talking heads they’re social parasites. Why should we dance to Fox’s tune? Owner Rupert Murdoch’s media empire is international. His values and lifestyle are repugnant to our hard-working families. His people have no loyalty to America.

Why do you think Fox attacks this generation of anti-Wall Street protesters? Why are their protests against Wall Street’s control of Washington the exact opposite of ours? Because Murdoch is a master of divide and conquer. Patriotic Americans should reject his manipulation, turn off Fox News, and start thinking for themselves.

I’ve pleaded for two years with Tea Parties around the Southern Tier that the Tea Party is headed for bitter irrelevance after the next election. We can escape that fate only if we change from an old folks club addicted to Fox News and start recruiting young people on the basis of the Tea Party’s three core principles: 1) fiscal responsibility; 2) limited constitutional government; and 3) the ideal of free markets.

Can anyone disagree that Wall Street is the greatest enemy of all three? Is supporting the banks with trillions of dollars of public funds while tens of millions of hard-working folks lose their jobs, homes and health insurance fiscally responsible?

Did you know that the CEO of Bank of America destroyed a half trillion dollars of his own shareholders’ assets just to increase his yearly bonus?

The Founding Fathers would be aghast to see Wall Street lobbyists making the laws, billionaires choosing our candidates, and weapons profiteers driving the Republic into endless foreign wars.

Can you imagine George Washington weeping as hundreds of thousands of crippled vets return home to a jobless economy after fighting opponents of our military occupation who see us as their King George III?

Wall Street has not only destroyed American industrial might and millions of small investors but also wiped out hundreds of thousands of small businesses, the heart and soul of free market capitalism. I recall the heartbreak when my father’s little hardware store was closed down after the arrival in town of Sears and Montgomery Ward.

A free people cannot live under a government that is owned by the top 1 percent. Not according to the three principles of the Tea Party. And, my Tea Party friends, that’s exactly what Occupy Wall Street is saying.

Let’s be honest with ourselves, fellow patriots, and this applies to the folks I’ve met in the Norwich, Otsego and the Southern Tier Tea Parties.

In two years of Tea Party meetings in three counties, I never met more than five souls under 40 years of age. Now millions of young people and folks of all ages have joined our cause. I’m jumping for joy. So should every veteran of our groundbreaking Tea Party anti-Wall Street protests of 2009.

Occupy Wall Street protests are taking place in over 1,000 communities nationwide and 80 countries. Join them now and embrace your neighbors for taking up our banner.

I learned one thing since 2009. We Tea Partiers have plenty to contribute to Occupy Wall Street!

When I spoke to hundreds of Tea Partiers outside the gun shop two years ago, I counted hands. How many faced a bleak future because Wall Street stole their retirement savings and destroyed their home equity investment? Almost every hand went up.

How many could manage the cost of a catastrophic family medical emergency? One lonely hand.

We are part of the American 99 percent the young people are fighting for!

Now I know what you’re thinking.  Fox News tells us that Occupy Wall Street folks are a bunch of anti-American, fascist, communist, socialist, progressive, lazy, and violent would-be terrorists with poor toilet training. Worse — they don’t know what they want!

Hello! This is the story broadcast by corporate media that lied us into Iraq, never tell the truth about the economy and that trivialize every election as a breathless horse race between two equally irrelevant clubs of windbags.

And they demand that we the 99 percent come up immediately with the answers to clean up the mess the media and the 1 percent created?

Fox’s disinformation, fear-mongering, scape-goating, name-calling, personal attacks these tactics are the response of frightened rich people the 1 percent whose only hope to keep their ill-gotten gains is to dumb down enough of us 99 percent so badly that some will oppose their own families’ interests.

Divide and conquer, that’s what ruling minorities have done since Biblical times. Read the Gospels.

Fox’s hate-mongering appeals only to the stubbornly deluded Americans among us. Sadly, it’s the way the American elites and their supporters welcome every new generation of idealistic young people. That was how “patriotic conservatives” greeted our brave defense of the Constitution and Bill of Rights fifty years ago in San Francisco,

It’s like the reaction of the emperor’s courtiers and subjects when the kid blurts out “The emperor has no clothes.” That’s why I feel compassion for my Tea Party neighbors who still buy into Wall Street’s propaganda despite their own economic suffering.

Let’s face it. Most Americans are emerging from a period of denial while the reality of another Great Depression sets in. We’re like abused spouses who finally wake up and confront our abusers. The “left” got suckered by Obama in 2008; the “right” suckered by the Republicans in 2010.  That’s an interesting coincidence, isn’t it?

Are we going to hold our noses and swallow a repeat performance next year?

All of us Left, Right and in-between have been hoodwinked. The American Empire is crumbling, exhausting its resources billions every day in ever-expanding quagmires hunting down shadowy “terrorists” and creating new enemies to justify the Pentagon’s looting our treasury. Wall Street’s globalized capitalism is destroying mother earth.

We confront an epic economic emergency, a shamelessly greedy and arrogant ruling class, and a hopelessly broken political system. The executive, legislative and judicial branches have all been corrupted by the rich 1 percent. Stunned Americans are falling into the hell of a Third World country.

And don’t we know it! The polls reveal that we have lost hope and respect for the leaders of both parties. Obama’s and Congress’s approval ratings share rings in the toilet.

No one should be surprised that “Take Back America” picket signs are equally popular with the Tea Party and Occupy Wall Street. Let’s take it back together and share it.

Leaders failed us.All we have is each other. We are all the 99 percent!

Just suppose local Tea Party and Occupy Wall Street folks agreed on just three demands that we know are supported by the overwhelming majority of our neighbors? What if we presented them to all candidates for local, state and federal offices, and we refused to work or vote for them unless they agreed to implement the popular will immediately after taking office?

Odds are they’ll all agree with us. Then we can work for whichever candidate represents our other values. Of course, after the election, success will depend on how well we work together, organize voters, hold joint demonstrations outside debates and Town Hall Meetings, and raise our combined voices inside too!

Together, we can let them know what we will do if they lie and betray us again!

Irving Wesley Hall is the author of the political satire, The Einstein Sisters Bag the Flying Monkeys, a hilarious primer on Christian Zionism along with Albert Einstein’s great-great-granddaughters‘ passionate defense of one secular and democratic state for all Israeli and Palestinian people. He is also executive producer of the documentary, Onward, Christian Zionists. His web site, “We’re Not in Kansas Anymore!” celebrates the 50th anniversary of the May 1960 San Francisco student protests against the McCarthyite House Committee on Un-American Activities, during which he was arrested. Visit www.notinkansas.us for details and his biography.

15 comments for “Selling Out the Tea Partiers”