Exclusive: The Park Police have agreed to let protesters camp out at Freedom Plaza in Washington D.C. for four months as they press their demands for a shift in national priorities from war and greed toward jobs and peace. Former CIA analyst Ray McGovern reports on a anti-war march to the White House.

Exhilarating is the most appropriate word to describe our assembly since Thursday on Freedom Plaza, our “Tahrir Square”, in Washington, D.C., called into being by October2011.org. And it appears we will be staying for the duration to exercise our freedom to assemble to petition for grievances, peacefully, unless the National Park Police go back on the stay they granted us Monday evening.

Last Thursday marked a sad anniversary, ten years since the U.S. attacked Afghanistan, even though its rulers offered to hand over Osama bin Laden once they were provided with proof of his complicity in the attacks of 9/11. 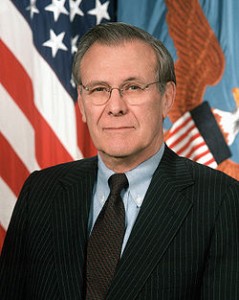 According to a memo made public by the National Security Archive on the tenth anniversary of the 9/11 attacks, Defense Secretary Donald Rumsfeld said, before launching the war in Afghanistan, that the United States needed a broader response than simply attacking al-Qaeda.

“If the war does not significantly change the world’s political map, the US will not achieve its aim,” said the memo from Rumsfeld to then-President George W. Bush on Sept. 30, 2001.

“There is value in being clear on the order of magnitude of the necessary change. The USG [US Government] should envision a goal along these lines: New regimes in Afghanistan and another key State (or two) that supports terrorism.”

After Rumsfeld’s memo, the United States deployed air strikes and special operations to support Afghan insurgents in driving the Taliban government from power. Then, even as bin Laden and his top lieutenants were cornered in the mountains of Afghanistan, Bush ordered the U.S. military to shift its focus to Iraq.

Bin Laden managed to escape to Pakistan and the deeply unsettled political situation in Afghanistan was put on the back burner, as Bush and his neoconservative advisers built a case for invading Iraq based on false claims about its possession of WMD and ties to al-Qaeda.

The Iraq War and the resurgent war in Afghanistan have now claimed the lives of more than 6,000 American soldiers and hundreds of thousands of Iraqis and Afghans, as well as costing the U.S. taxpayers over $1 trillion and counting.

So, on Day Four of our “occupation” in DC, hundreds of military personnel, veterans and families against war marched at noon Sunday from Freedom Plaza to the White House to ask President Barack Obama, “Where’s Our Beer Summit?” The Secret Service would not forward our petition, but rather gave us a telephone number to call.

At an impromptu assembly across from the White House in Lafayette Square, a mother of a U.S. Marine gave a very moving talk about her son, who has orders to go back to Afghanistan early next year for his FIFTH deployment to the area.

Her voice, and the voices of other mothers in similar pain, reminded me of what I have come to regard as a universal truth; that mothers grieve in such circumstances in ways that the rest of us cannot even comprehend.

After I added some remarks, videographer Bill Hughes asked for an interview off to the side. The first thing that came to mind was a 19th Century Russian poem by Nikolay Alekseyevich Nekrasov, the first line of which is “Paying attention to the horrors of war.” It is a poignant commentary on the unique, “sacred, sincere tears” of mothers of the fallen. [Click http://warisacrime.org/content/video-ray-mcgovern-reflects-horrors-war]

I tried to provide a translation on the fly, but could not do the poem and the feelings justice. Translations into English also fall short. Here’s one stab at it (not by me).

Hearing the terrors of the war, sore troubled,

By each new victim of the combat torn —

Nor friend, nor wife I give my utmost pity,

Nor do I for the fallen hero mourn.

Alas! the wife will find a consolation.

The friend by friend is soon forgot in turn.

But somewhere is the one soul that remembers–

That will remember unto death’s dark shore,

Nor can the tears of a heart-stricken mother

Forget the sons gone down on fields of gore.

One soul there is that like the weeping willow

You are all invited to join us on “Tahrir Square” in Washington.

Ray McGovern works with Tell the Word, a publishing arm of the ecumenical Church of the Saviour in inner-city Washington. He was an Army infantry/intelligence officer and then a CIA analyst for a total of 30 years; is now on the Steering Group of Veteran Intelligence Professionals for Sanity and a member of Veterans for Peace.