From the Archive: Over the centuries as Christianity bent to the interests of the rich and powerful, the story of Jesus’s fateful week in Jerusalem was reshaped to minimize perhaps its central event, his overturning of the money tables at the temple, a challenge to the merging of religious and political power, says Rev. Howard Bess.

Christians have special celebrations for the key events of Holy Week, but they often overlook one of the most important.

Palm Sunday celebrates the entry of Jesus into the city of Jerusalem. Maunday Thursday is a solemn replay of his last meal with his disciples. Good Friday takes us through his mock trial and his death of horror on a Roman Cross. Easter is the Christians’ triumphant celebration of Jesus’s resurrection from the dead. 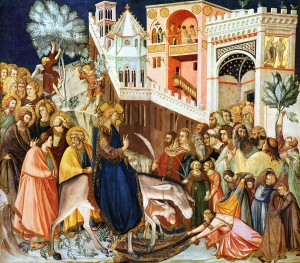 But there is a missing piece. The incident that gives sense to the week’s climactic events is Jesus’s overturning of the money tables at the temple.

However, modern scholarship is putting an emphasis on understanding this historical incident in context. The first piece of the puzzle is the temple itself.

For nearly half a century, including the time of Jesus’s birth, Herod the Great had ruled Palestine as an ambitious king appointed by Rome’s Caesar. Herod was of mixed racial background and claimed some Jewish blood. He wanted to be known as King of the Jews, but acceptance by the Jews was difficult to attain.

Herod the Great also was a builder. Under his reign, he built civic buildings and ports, but his greatest building project was the rebuilding, expansion and refurbishing of the Jewish temple in Jerusalem. It was known as Herod’s temple or is sometimes referenced as the Third Temple.

Because of that history, the reign of Herod and the operation of the temple were linked and locked. It was the near inseparable joining of government and religion. To offend one was to offend both.

Herod the Great died in 4 CE, when Jesus was still a child. During the years of Jesus’s teaching ministry, Herod’s son, Herod Antipas, was the ruler. The joining of kingdom and temple continued.

Jesus grew up and taught in a rural area 70 miles north of Jerusalem. His faith was shaped, not by Jerusalem and the temple, but by weekly gatherings of the community elders as they read Torah (Jewish law) and discussed its meaning.

Jesus and his followers had limited contact with Jerusalem’s social, political and religious leaders, mostly through the retainers (enforcers) of Herod’s Roman rule who also represented the Jerusalem temple. Retainers made regular trips into the rural north to collect tithes and taxes.

The great tradition is the definition of society laid down by those who rule and enforced by their retainers. The great tradition is centered in cities in which the controlling institutions are located. For Jesus, that place was Jerusalem. There is no evidence that Jesus ever visited Jerusalem as an adult before the last week of his life.

The small tradition is a critiquing and competing interpretation of life. It almost always arises with devout believers who have escaped the burden of the great tradition and its demand for conformity.

John the Baptizer was the first of the little tradition prophets presented in the Gospel narratives. His harsh criticism of rulers led to his death. Jesus took up the mantle.

To Jesus, these issues were all tied together.

Jesus was a largely unknown and harmless critic as long as he remained in his northern rural setting. He was clearly an apocalyptic preacher. He advocated overthrow of a corrupt system. He believed the days of the oppressors were numbered. But he believed the overthrow could be accomplished by love, mercy and kindness.

Jesus took his apocalyptic message to Jerusalem. However, to call his arrival a triumphal entry is to miss the point completely. He chose to enter Jerusalem riding on a donkey as mockery of the ruler’s horse.

It was an ancient form of street theatre that Jesus and his followers used to make their point. The great tradition that was accepted by Jerusalem’s masses was being publicly taunted by a figure of the small tradition.

But the critical point of Jesus’s visit to Jerusalem came when he visited the temple. In no sense had he come to worship and make sacrifice. He came to disrupt and to make pronouncements about the judgment of God on the whole operation.

Jesus did not go to the temple to cleanse. He came to the temple to announce the destruction of a whole way of life. Those who operated the temple had no power to silence Jesus and put him to death. Those powers were held by the Roman retainers.

The charges that were leveled against him can be summed up as insurrection. There were three specific charges: encouraging non-payment of taxes, threatening to destroy property (the temple), and claiming to be a king.

It was the temple incident that took Jesus from being an irritating, but harmless country rebel from the rural north to a nuisance in a city that controlled the great tradition. Rome’s retainers killed him on a cross.

The theological meaning of the series of events remains in our own hands. However, the key to understanding the week of Jesus’s crucifixion is the incident at the temple.

The Rev. Howard Bess is a retired American Baptist minister, who lives in Palmer, Alaska. His e-mail address is hdbss@mtaonline.net.